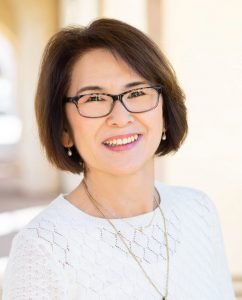 For a year after Kyomi O’Connor lost her husband, Patrick, to metastatic melanoma in the brain, she was overcome with grief and at a loss for how to cope until she began writing. Already a devoted Buddhist practitioner, Kyomi found that writing was a new kind of spiritual practice, one that uncovered old wounds, brought light to the dark places inside her, and helped her reach a place of peace and healing.

Kyomi moved to the States from Japan in February 1990 to work as a post-doctoral researcher at the NIH in Bethesda, Maryland. Soon, she fell in love with her husband-to-be, Patrick. Their journey together led them to change their careers, move to San Diego, and practice Buddhism. They grew spiritually together, and became leaders in their Buddhist community and inseparable partners through the many hardships they faced together. In the summer of 2013, Patrick fell ill with the diagnosis of stage IV metastatic melanoma in the brain, and passed away on July 4, 2016. After his death, writing helped Kyomi rediscover light in her life. These days, she spends her time writing (she’s an active writer online at Medium), practicing yoga, cooking, meeting friends, and taking photographs. Kyomi lives in San Diego with her two cats, Tommy and Omi.