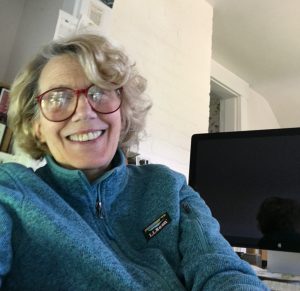 I was born in Boston into WASP privilege. But all was not “sweetness and light.” In my earliest memory, my mother was beating me, and I wished I were dead. If I died, she’d be sorry. Mumsie’s physical and emotional abuse continued throughout my childhood.

I was twelve when we moved to the West Indies where my family lived for 17 years. The move was an earthquake, upsetting everything I understood about myself. For two years I attended a school taught by Belgian missionary nuns. I was the only white, white in a class of mostly Black West Indians. I began to feel a strong identification with the “natives”, who, it seemed to me, were discounted, just as I felt “discounted” by Mumsie.

Eventually, I settled in the U.S. I married and had children. I forgot about my West Indian childhood. I worked as a medical writer. Then I became a volunteer religion teacher for children with disabilities, such as Down’s syndrome, autism and epilepsy—a work that I loved. The same empathy that grew in me towards my West Indian schoolmates, it seems, applied to special-needs children and their mothers. And my teaching job now launched me on a life-changing adventure!

In 2000 I traveled with a group of teachers on a Fulbright grant to Ghana, West Africa. Everywhere I looked in Ghana I saw scenes of my West Indian childhood. But as I relived my former island life, I began to understand my own “colonial” outlook too, which was very disturbing.

One day in the north of Ghana, I met the mother of a special-needs child, Sibri. I connected with Sibri, just as I had connected with the mothers of my special students back home. Sibri and I began to correspond and soon we developed a friendship. I sponsored Sibri’s university education, and Sibri’s life changed dramatically. She was transformed from pariah (mother of a handicapped child) to community leader. When I returned to Ghana in 2008, Sibri’s brother, in gratitude, installed me as their Queen, Kpatihi Maligu Naa, “Queen of development.”

In 2011 when I returned to Ghana, Sibri and I set up a girls’ scholarship program and finally in 2017 we opened our school, Kpatihi Maligu Naa Hope for Children Academy. Kpatihi Maligu Naa Hope for Children Academy, is in a very remote region of extreme poverty in Northern Ghana, mostly Muslim, where girls have been denied schooling. We have about 2/3 girls in the classes. This year we are building an extension to accommodate our burgeoning enrollment!

Widen My Heart is the story of how Sibri, a Muslim woman, and her West African family embraced me, a white North American Christian. It’s the story of how I have grown in love. Widen My Heart includes themes of my own racism and classism and wrestling with my awareness. But the main takeaway is how the pain of my childhood abuse became an impetus for the widening of my heart: In pain I learned empathy for the other, whoever that might be.

Bio
I found it extremely hard to write about my childhood abuse. A voice in my head kept saying, “You can’t say that!” I persisted only because I know that have been given a unique glimpse into a people from West Africa and my abuse is a part of the story. My childhood abuse honed compassion in me for the other. My story is about moving beyond a narrow place of WASP privilege to connect with some others in a remote region of the world whom I have come to love. I want to share this journey of love!