What is a Healing Story? 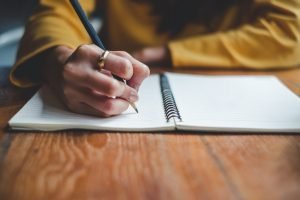 Dr. James Pennebaker, the professor who dug deep into the research about how writing heals calls a story, “A type of knowledge”.

I found this comment quite fascinating and began to explore the ways I felt that a story reveals knowledge and takes us deeper into exploring who we are. It’s an inner, unconscious knowledge at first as our fingers move along the page. Working with my students, I’ve seen how putting emotions and situations into words can offer immediate relief.  Stories are made of several layers: the factual—what happened, when, where. And a wisdom layer, an insightful voice that evolves as we write and that spills out unexpected riches.

Interestingly, there’s split consciousness between the narrator and the character in the story. Think of the observer/narrator as a camera lens that captures the entirety of the unfolding story, while the character inhabits the body of the “I” that is living through the various scene.

A story is a narrative that has a beginning, a middle, and an end. While this seems like a simple definition, it means that we “construct” a story. We shape a way for events to evolve into a culmination and an eventual resolution. The creation of a story, or assembling it, goes beyond journaling. In a memoir story we draw upon fictional tools like scenes, descriptions, character development, and conflict that shows an experience by taking the reader through it as if they were in your shores.

Scenes bring you, the writer/narrator, back to the time you are remembering. We again become the six-year-old whose father died or the little girl who missed her mother. Bringing ourselves into this intimate contact with who we once were and witnessing ourselves at the same time helps us heal by transforming our perspectives about our life experiences.

Story writing is important because it gives structure and meaning to an event. After writing their memoirs, many people report that they are no longer haunted by disturbing memories and emotions. The writing process has helped them to integrate their life experiences and resolve the past to a greater degree.

Most people have taken the required English classes, and learned how to construct a narrative that compresses, summarizes, and usually remains abstract. We were taught that good writing leaves out details.

But writing stories is different. Here is an example of a narrative that does not use sensual details or scenes. It’s not very gripping.

When I grew up in Columbia in the state of Missouri, I was born to parents Ben and Sally. I had five brothers and sisters and we got along well except when my older brother beat me up. I enjoyed playing baseball and family holiday gatherings. I got good grades in school, which pleased my mother.

We live in a world full of sensual experience. When we write, we need to allow ourselves to feel this sensual world and bring it to the page. Writing our sensations means choosing words and associations that stimulate sight, sound, taste, smell, and touch in the mind of the reader.

Sight  Use color, shape, texture, and other specific details to describe how things look. Specificity helps us remember better.

Sound  Many memories are associated with intense sound, such as loud noises—screaming, storms—anything that overwhelms our senses. Even small sounds—a clock ticking, keys jingling, a cat mewing—may evoke potent memories. Most powerful of all may be the sound of silence. Of course, some sounds evoke happy memories—the ticking of a grandfather clock, a rushing stream, the ocean, and music.

Taste  Our taste buds are particularly sensitive during childhood. Some of our best memories involve food and spice: the first time we ate a particular food, or our favorite meal or dessert.

Touch  Our skin can apparently retain the memory of a particular feeling, for example, the texture of rough or smooth surfaces, such as leather, sand, or a cat’s fur. Our bodies remember how we felt when we saw our first sunset or when something significant happened—a thrill coursing through the blood or a hollow ache.

Below are examples of showing a story in scene and including sensual detail. Note that the details of the story are shown and not just told.

Birth   It was a snowy day in December, I’ve always been told, when I began my arrival into the world. My four brothers and sisters waited impatiently at grandma’s house for me to come home with our mother, whom I’d taken away from them. Late in my life they would remind me of this abandonment, but the day I arrived, the photos show their eager faces, from my brother age 10 on down to little Betty, looking at me with wide eyes.

Place   The most memorable thing about living in Columbia as a child was the sudden arrival of amazing thunderstorms. The whole sky would ripple with huge, dark clouds and lighting would flicker across the horizon.

The conflict with the brother  I could tell when Bobby was about to blow. His face would get crinkled, his eyes narrowing like a snake’s. His fingers would twitch and I’d try to figure out how to get away.

Holidays    The long table would be loaded with turkey, dressing, two kinds of potatoes, three vegetable dishes, with five pies waiting for us on the side table. The jokes would fly around, and no matter what strife there had been, on this day we would celebrate.

Good Grades   Every time I brought home the report card, it was like Christmas. I’d proudly hold out the folded yellow paper printed with the name of the school and mother would nervously wipe her hands on her apron before opening it. Then her expression would change, as if the sun had just come up, her eyes shining. I knew she was proud of me, and I’d do anything to have her look at me like that.

When you write, try to capture memories through sensual experiences. Feel, smell, and sense the details you remember. Keep in mind that the use of sensual descriptions and language creates a feeling in the reader similar to your own experiences. This is what you want to evoke. You want the reader to feel your world, to enter into your body and mind, and journey with you into the past through the powers of your imagination and memory.

Many people I’ve worked with through the years have discovered new insights about themselves and their families when they write stories with clear scenes and sensual details. One woman wrote about the trauma she experienced at the hands of her mother when she was a small child, a beating that terrified her, but she had forgotten about it until she was writing. A small detail arose in her writing: the close-up pattern on a linoleum floor. In the safety of our writing group, she immersed herself into the scene completely and into the body of the small child she had been when this traumatic event took place.

While it was difficult for her to write the story, reading it was even more challenging. She stood up and read carefully, her hands shaking, about the beating, her feelings, and the decision the beating had caused her to make. She realized that she’d remained unconsciously trapped by that event. After she wrote it, she felt released. She said she felt taller, healthier, and more courageous. The whole class witnessed the suffering of the little girl that she once had been, and she took in the support and compassion of the group.