Memoirists: Get curious!  What truths will your naked writing reveal? 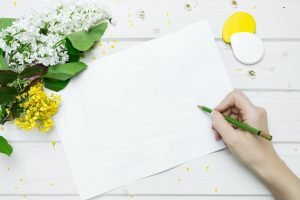 A hundred of us were on a 3-day Outwild retreat for individuals looking to create more outdoor and value-driven lifestyles. On the afternoon of the second day, a large group of us sat at covered picnic tables at the Earth Trek retreat center nestled alongside the South Fork American River in Lotus, CA. I was leading a workshop called “Going Outwild Inside: Cultivating a writing practice.” Many in the group, adventurous sorts, did not think of themselves as “writers,” and yet I knew they had stories bursting to be told. We had just finished five minutes of freewriting to the second two-word prompt. I asked if anyone would like to share. A man raised his hand.

“I didn’t know what to expect from this workshop. I was resistant to coming. I’m not a writer, but…I had no idea this was inside me. I’d like to share what I wrote.”

He read the raw naked writing that had poured out of him unbidden. The setting of his response was his mother’s deathbed. He wrote about the words they had not exchanged, what he wished he’d said to her, and the ways he appreciated how his mother had positively affected his life, even though they had struggles too. Tears sprang from my eyes.  He wiped his own.  I looked around. Most of the rest of the group were crying. This man, whose walls were up when we started, completely took us in with his vulnerability—a place to which we each could relate, yet rarely dared to share.

This singular moment became one of the highlights of the weekend. We experienced the power of discovering what wanted to be said. We also experienced the power of listening and feeling connection and presence as people shared their emotional and vulnerable writing. This is where we memoirists need to drive our readers–into the heart of a scene, crying along with us.

So how do we get there?  We practice letting the words flow.

The words that flow from freewriting never sound like a polished college essay. They might stop and start or come rushing through like a white-water river in a cadence similar to poetry, exposing fertile snippets of life.

You never know what’s going to come out during naked writing. It calls upon something different from us. Instead of trying to draw upon what we “know,” in naked writing, we dive into the unknown. We discover, as it is unfolding in the moment, what thoughts arise, what themes present themselves, and what gentle pondering wants to be gently pondered. We become curious about the process of writing itself. When we allow our words to flow unfettered, we peek into our minds without judgment, without striving to perfect our words. In doing so, we befriend ourselves. We learn to trust our natural voice. Memoirists, especially, need to get comfortable mining the recesses of their mind and speaking about it naturally.

Then, we share. When we share our naked writing, we practice being vulnerable. We dare expose ourselves.  When others share their naked writing, we learn to listen carefully. We take off our analytical judging minds and open our hearts, reflecting on passages that moved us. We encourage each other.

Are you curious? Would you like to practice allowing words to flow?

About Marijke McCandless
Marijke McCandless is an award-winning author and long-time awareness practitioner. Her memoir, More…Journey to mystical union through the sacred and the profane (written under a pen name) has won awards nearly every year since publication in 2016. She leads a popular online writing practice called Write Now Mind and awareness practice sessions called Juicy Practices for Getting Present plus other immersion workshops. She is known for her playful attitude, tenacious spirit, and adventurous soul. Her recipe for enlivenment? Listen. Play. Write. Stay tuned for her upcoming book: Naked in the Now: Juicy practices for getting present https://marijkemccandless.com

Photo by Neven Krcmarek on Unsplash