In 1977, Jeanne’s German ex-husband, Klaus, tells her he has a new job and wants to take their three-year-old daughter and six-year-old son away for a long weekend to celebrate. Jeanne relents. But Klaus never returns and instead sends Jeanne a letter, delivered by a priest, in which he declares that he has fled to Germany and Jeanne will never see him, or her children, again.

The next four months are filled with agony, despair, and anger as Jeanne seeks legal support but quickly learns that federal parental kidnapping laws will offer her little help. She reflects on her tumultuous ten-year marriage to Klaus and the unsettling events that followed their divorce. A product of the patriarchal culture of the 1950s, Jeanne’s nice-girl mentality is being tested and reshaped by the feminist movement of the 1970s, and she finds that the kidnapping ultimately becomes a doorway to unexpected strength.

You’ll Never Find Us is the story of a young mother coming into her own power, regardless of past mistakes, bad judgment, and fears; the story of a woman who realizes that she must tap into her newfound resilience and courage to find her stolen children—and steal them back.

t wasn’t until 2001, when my ex-husband died, that the idea to write the 1977 story began to percolate. I started writing it in 2005 because of encouragement from author Christina Baldwin at her 2005 writers’ retreat on Whidbey Island.

It’s been fifteen years in the making, so my desire to share the story has evolved over time. Originally, I didn’t care if I had an audience. It was strictly cathartic. Poet and author Mark Nepo said in The Book of Awakening, “Tragedy stays alive by feeling what’s been done to us, while peace comes alive by living with the result.” As long as I let the story fester inside me, there would be no end to the pain. It would win. But by writing and shedding light on the story, by learning about writing and myself over the years, I could know some peace.

Once I started, I had to finish. It was a creative challenge that required years of workshops, critique groups, and mentors. And as the story unfolded and grew, so did I. Also, the scope broadened over the years as I studied writing at a deeper level and researched the historical elements crucial to the story.

Though I wouldn’t recommend my backburner fifteen-year writing process, I am glad the book is coming out now at this point in time. It seems particularly relevant given its major themes, which are timelier than ever: dealing intimately with white supremacy, patriarchy, feminism, and women’s empowerment, and the still prevalent parental child stealing.

It also helped that certain characters passed on, increasing my comfort level to speak the truth I needed to speak. And now, let’s face it, I’m not getting any younger, and I’d like to get cracking on the next memoir. 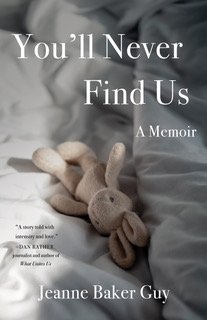 Jeanne Baker Guy of Jeanne Guy Gatherings is an author, speaker, and journal-writing coach. (Her first name is pronounced Genie, though she claims no magical powers.) Born and raised in Indiana, she received her bachelor’s degree in English literature and drama from Indiana University.

After a twenty-five-year career in office management and business development, she found her calling in facilitating personal growth circles. Her teaching career began in 1995 facilitating “Your Life Is Your Art! You Are the Artist” workshops based on Julia Cameron’s masterful book The Artist’s Way.

Years of blogs, filled with her irreverent humor, serve as the basis for her classes and her 2015 book Seeing Me: A Guide for Reframing the Way You See Yourself Through Reflective Writing, co-authored with photographer David Rackley. You’ll Never Find Us is her debut memoir, published by She Writes Press (August 2021).