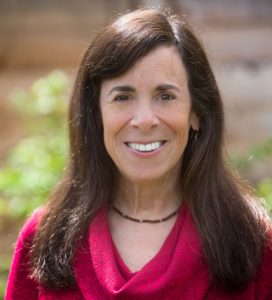 We are pleased to welcome Jo Ivester to our NAMW discussion again—this time about her second memoir Once a Girl, Always a Boy. Please read on to learn about the background and inspiration for her new memoir.

In 1967, when Jo Ivester was ten years old, her father moved their family to an all-black town in the Mississippi Delta, where they were drawn into the civil rights movement. Because of this experience, Jo is committed to advocating for equal rights for all.  Her best-selling, award-winning memoir about her family’s time in Mississippi, The Outskirts of Hope (published by She Writes Press in 2015) has led to numerous speaking engagements about racial relations.

In recent years, Jo has broadened her social justice focus to include speaking and writing about gender identity and the challenges faced by those who don’t fit into the mainstream definitions of male and female. Thirty years ago, she welcomed her son Jeremy into the world as what she thought was her daughter. As a child, he preferred the toys and games our society views as masculine. He kept his hair short and wore boys’ clothing. Jo called him a tomboy; that’s what he called himself.

In his mid-twenties, after much self-reflection, research, and discussion with friends, family, and physicians, Jeremy had his breasts surgically removed. A year later, he began taking the hormones that would lower his voice and give him a beard, and he announced his new name and pronouns. 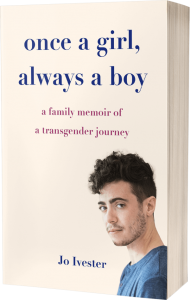 Once a Girl, Always a Boy is Jeremy’s journey from childhood through coming out as transgender and eventually emerging as an advocate for the transgender community. It is not only Jeremy’s story but also that of his family, told from multi perspectives — those of the siblings who struggled to understand the brother they once saw as a sister, and of the parents who ultimately joined him in the battle against discrimination. This is a story of acceptance in a world not quite ready to accept.

In telling Jeremy’s story, Jo wrestled with what name and pronouns to use in describing his childhood and young adulthood. Early drafts used the name Jeremy and masculine pronouns throughout, in deference to the norms established within the trans community. Eventually, though, Jo decided that it would be better for her readers to see her son as Emily initially, so that they could be drawn into Jeremy’s journey instead of just seeing it as a fait accompli. So she re-drafted her memoir and shared both versions with not only her son, but also with the transgender advocacy community of which she had become a part. Although not everyone would have taken the same approach, the response was to understand the rationale and to say that if it was okay with Jeremy, it was okay with them.

Through her writing and speaking, Jo Ivester shares the story of what it was like for her son to grow up in a world not quite ready for people like him. Jo serves on the boards of Equality Texas, the Anti-Defamation League of Austin, and the Austin chapter of GLSEN.

Before becoming an author and speaker, Jo received a BS in civil engineering from MIT and an MBA from Stanford. She worked in transportation and operations management and then taught at St. Edward’s University.

Her new book, Once a Girl, Always a Boy, has recently been featured in Ms. Magazine Parade Magazine, Travel & Leisure and Lambda Literary, and has received starred reviews from Kirkus and from the Library Journal. It debuted as the #1 new release in the Amazon category of “Parent & Adult Child Relationships.”

Now living in Austin, Jo has been married to Jon Ivester for forty years and has four children and five grandchildren, all living close by. She loves spending time with her growing family, remains passionate about her advocacy work, and enjoys skiing and swing dancing.

You can learn more about Jo and her work at her website: www.joivester.com and you can e-mail her at [email protected] and follow her on Facebook at: www.facebook.com/joivesterauthor. She is available for speaking engagements with all interested groups, eager for the opportunity to help others learn more about what it means to be transgender.

Listen to the audio recording below.

This website uses cookies to improve your experience while you navigate through the website. Out of these, the cookies that are categorized as necessary are stored on your browser as they are essential for the working of basic functionalities of the website. We also use third-party cookies that help us analyze and understand how you use this website. These cookies will be stored in your browser only with your consent. You also have the option to opt-out of these cookies. But opting out of some of these cookies may affect your browsing experience.
Necessary Always Enabled