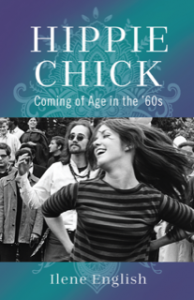 Hippie Chick is about the youngest kid in a working-class Jewish family of six siblings, spanning about twenty years of age, who, because of a seriously ill mother, becomes neglected and kind of lost. Though she is a lost child, she is a free spirit and she just kind of bumps along looking for love in all the wrong places.

At the pinnacle of her teenage rebellion, the narrator makes a courageous decision to tell her mother that which would have surely broken her already unwell heart, that she had been lying and sneaking out with an Italian boy. But the very evening she plans to tell all, she, instead, finds her mother dead. It is not lost on her that she got a free pass, though she couldn’t help but wonder at what price.

Being the last kid at home, she finds herself living alone with a difficult father. A gift from her favorite sister Carole of a one-way plane ticket from New Jersey to San Francisco marked her high school graduation in 1963. She lands in the Haight-Ashbury where she shares an apartment with three older guys. This is the story of a young girl carried along by the wild energy of the sixties during the earliest days of sexual freedom, psychedelic drugs, the jazz scene and rock n’ roll.

But when life in San Francisco starts to unravel in 1967, she moves to be nearer, once again, to her sister, Carole, now in Hawaii. Soon after her arrival, Carole develops a fatal disease while pregnant and asks our narrator to take the baby and raise her as her own, which she does. But soon after Carole’s death, her husband gives the baby away for adoption. Facing deep feelings of anger, grief and loss, she goes through the motions of trying to pick up the pieces of a life.

The story looks at the conflicts, struggles & pitfalls that the character faces trying to achieve her goals, as well as at how her journey impacts her development as a woman and as a human being. The arc of this character goes from being wounded to being healed, from being ignorant to being wise.

Why I wanted to write Hippie Chick.  When I first began the writing process, my idea was to write a parenting book that revealed my struggles as a single parent. I had recently become licensed as a psychotherapist, and I wanted to use the authority of my license to tell my personal story and share what I’d learned.  So, it was always a memoir, of sorts. But it was you, Linda Joy, who wanted to know why I was so passionate about parenting, and before I knew it, I was writing a much bigger story. At a certain point, that story took on a life of its own, particularly when viewed through the lens of such an historic time period as the ‘60s.

What I understand now is that for so much of my life I was alone. I think that what I needed was to be seen–to be witnessed.  And I wanted to celebrate that young girl’s resilience. My story is about seeking and reclaiming my essentially healthy self. And it was always my hope that my story, whichever story I chose to tell, might help others find ways to seek and reclaim the best of who they are for themselves.

My journey now   I am a therapist. People come to me in real pain and I am able to use the stories of my own life to inform what I say or share with them. One message is that inside our shame, disappointment and rage, there is meaning. Writing the memoir was my way to access that meaning.  For instance, I was convinced that I was not a loved child.  I now understand that that was never true.  In the ways of a child, I thought that all that was wrong was about me.  I have now claimed that younger part of me and make sure to let her know that she is loved and has always been loved.  That alone, has been transformative.  I take care of myself, nurture myself, and pay attention to what I need.  This is new territory for me.

There is nothing my clients can tell me that I don’t see as beautiful in its humanity.  I have the compassion to make my clients feel safe even in their brokenness, but I also have enough wisdom to hold on to the hope for them.  All we have to offer in the end is love. 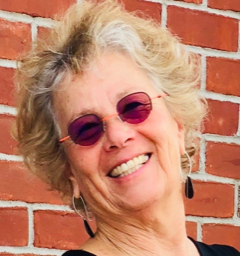 Born and raised in Irvington, New Jersey, Ilene was the youngest of six, a tag-end kid raised in the middle of a shopping center, when her father refused to sell the family home. Because her mother was seriously ill most of her childhood, Ilene was something of a lost child. But in spite of this, she was a free spirit, smart, cute, awake and creative, her life fueled by an innate sense of optimism and determination.

Ilene was an early psychedelic pioneer, experimenting with LSD during a time when it was still legal, its effects not yet fully comprehended. During the early sixties, she along with an entire community of fellow trippers, innocently thought that they could change the world into one that valued love over materialism, particularly though the use of psychedelic drugs.

Years later, Ilene is now a licensed Marriage & Family Therapist.  She helps people reunite with their innate wisdom, so they can experience more of the love, connection and happiness that she believes is every human’s birthright.  She helps people develop a deep knowing of who they are and what they stand for.

This, her first book, is her discovery about herself and life, and her journey to become who she is today.  She is happy to connect with readers. You can email her at ilene@hippiechickmemoir.com.