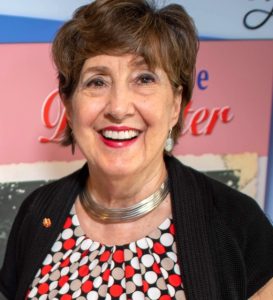 Mennonite Daughter: The Story of a Plain Girl records the charms and challenges of growing up in the strict Mennonite culture of Lancaster County, Pennsylvania in the 1950s. My memoir reveals my shift from plain to fancy, bucking a heavy-handed father and challenging church rules.

At the heart of my story is the struggle to answer a question: “What was the source of my father’s anger?” And then another question dangled: “Should I reveal this family secret admitting to the whole world that my father physically abused me as a child?” Author May Sarton has admitted, “I have never written a book that wasn’t born out of a question I needed to answer for myself.” I felt a similar impulse.

Previously as a college teacher, I approached writing with an academic mindset. Now I realized I had to learn the craft of storytelling, which began with Linda Joy’s 6-month memoir writing course. Retired, I longed for a social connection too and began blogging, the key to forging connections with other writers and readers.

While I continued to write family stories, I also recorded what was going on inside my head. Not knowing exactly where I was headed in the writing process, I wrote about the slipperiness of my memory and the search for a narrative arc. Three years into the writing, I noted: “Be prepared to make adjustments, start over even.” A beta reader of an early manuscript asked, “What is your story about?” a signpost that I had a long way to go. I encountered forced hiatuses too. During the 5-year writing experience, my mother died; then my aunt died, necessitating clearing out two homes with piles of stuff. Then my brother got sick and died just after we moved from a home we lived in for 37 years.

I am a self-published author, who also opted to do my own marketing, a decision prompted by my Mennonite frugality perhaps. Though I have paid for a Goodreads Giveaway and a Twitter blast, I organized my own book launch and contacted bookstores, a TV station and writing groups. Right now some Amazon reviewers are telling me that reading my story has helped heal hurts from their own early experiences, the best kind of pay-off for my memoir writing.

What we will explore:

Marian Longenecker Beaman is a former professor at Florida State College in Jacksonville, Florida. Her memoir, Mennonite Daughter: The Story of a Plain Girl, records the charms and challenges of growing up in the strict culture of the Lancaster Mennonite Conference in the 1950s. Originally from Elizabethtown, Pennsylvania, Marian taught English for three years at Lancaster Mennonite School before moving from her home state to Charlotte, North Carolina and then to Florida. Now in her Third Act, she has embraced blogging, which led to re-purpose blog posts to craft memoir. She shares her story to preserve early memories and to leave a legacy for future generations. She lives with her artist/designer husband Cliff in Jacksonville, where her grown children and grandchildren also reside.