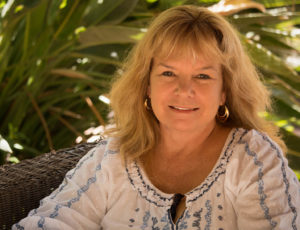 Leslie’s memoir starts in a broken home in the 1970s and moves into a coming-of-age adventure when, at the age of 14, she and her two sisters have to batten down the hatches on their 45-foot sailboat to navigate the Pacific Ocean, as well as the stormy temper of their larger-than-life Norwegian father.

It is the story of how a young girl comes into her own power and strength against all odds in a dysfunctional family having the adventure of a lifetime. Young Leslie embraces the sailing experience and turns it into a growth and maturation process, finding both beauty and spiritual solace in the natural world.

After her mother and father divorce at age seven, and full custody is given to her father, Leslie quickly learns the hard lessons of being Dad’s favorite. The abuse begins at age nine and doesn’t end until she begins to fight back at fourteen. 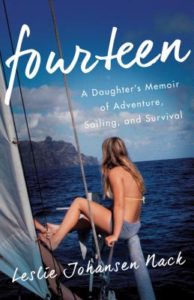 At twelve, the family moved from their 63-acre rustic ranch in Northern California to a 45-foot sailboat in Southern California where they spent two-and-a-half years living aboard their boat preparing for the trip of their father’s dream.

On February 5, 1975, they left everybody they knew, including their mother and began the journey, landing first in French Polynesia. Fourteen is the first of two books in a story of courage and hope, and of one girl’s fight against an overbearing, abusive and sometimes irrational father who demanded the best, while sometimes doing less than the best himself. You will be inspired by Leslie’s courage and fight and be amazed at all she encounters and overcomes.”

Leslie Johansen Nack graduated UCLA with a BA in English literature. She is a member of the National Association of Memoir Writers and San Diego Writers Ink. She lives in San Diego and has two children with her husband of twenty-six years.