How to Manage the Inner Critic and Write Your Truth 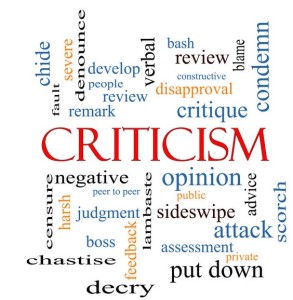 The inner critic can be tenacious. Most of us have some kind of inner critic voice that nags us with doubts about our writing. We want to get rid of it, but the truth is that the critic is a part of us. We’re all vulnerable human beings with doubts and fears. And many of us have internalized the voices of family. I call them the “outer critics.” You know how it goes: How dare you write about the family, you’re betraying us! Don’t air your dirty laundry in public! You are lying—it never happened that way!

Sometimes the inner critic is a feeling than an actual voice. It weighs us downand makes us detour around the tough stuff. We pull back to avoid uncomfortable feelings.

The critic can sneak up on us: what if we just don’t feel like writing? What if we don’t hear a voice exactly, but we just don’t write? Instead we clean the house, wash the dog, and weed the garden. On it goes.

Hidden shame and guilt about our story can fuel the inner critic’s power. It’s like an iceberg: we don’t know how large a space it takes underneath until we hit it. When I coach my memoir students, I look for clues to the hidden elements that signal they’re getting in their own way and making themselves small. For instance, if they’re writing about abusive parents, or if they had a harsh English teacher, or had to be perfect—that’s fuel for the inner critic. There seems to be a continuum, from a “mild’ to “mean” inner critic.

The mild inner critic voice may interfere more with finding time to write than attacking you. This is when you plan to write, you even put it in your calendar, but don’t get around to it. You’re not in the mood. You can’t get into the zone. It’s so subtle you don’t even know it’s operating on you. You can tell by looking at how many times you went to your desk to write: if it’s none, perhaps the subtle inner critic is making it easier not to write.

A medium level of inner critic voice is easier to detect. You can hear it telling you things like “are you sure you have it in you to write a whole book” or “you got B’ s in English? You’re wasting your time.” It’s the voice of doubt, it tells you this is too risky. That you shouldn’t tell anyone else’s story—and since your family is part of the memoir, you shouldn’t write about them. You have too much to do, you don’t have time to write, and you have a terrible memory. It compares you to “real” authors and shows you how bad your writing style is.

The attack dog inner critic is after blood. It slams you to the ground, takes away all your energy and even the idea that you thought you could ever write anything. You’re incompetent, ignorant, stupid, and hopeless. You have no business even toying with the idea of writing a memoir—where did you get such a hair brained idea anyway. You’re useless, a no-good liar, and you should be ashamed. You could hurt people in your writing group with the stuff you’re writing. You’re selfish and you’re whining. Get in the present, leave the past behind and forget about it. We have to combat these voices.

The “attack dog inner critic” makes you feel ashamed for what you want to write and who you are. It whittles you down to nothing. One of my students talk about this level of his critic not as a voice, but a black hole where he gets sucked into, unable to write a word. He knows this voice comes from years of being criticized, judged, and punished, but he still has to work with it. He gets up early in the morning to grab a few sentences before the “gets” him. Another person has to write very fast so he can outrun that devastating shaming voice.

Outer Critics are people who may feel threatened or exposed by appearing in your story. The outer critics don’t want you to write about family. They say you shouldn’t speak ill of the dead. Their voices limit us and keep us small, but because these outer critics are real people, it’s hard to simply ignore them.

When we censor ourselves, we cut away the guts of our story, the truths that made the story powerful. We need to face the hard stuff, the dark moments and pain, try to work through it. The stuff that freaks you out is the “radical edge” of your writing, “Radical edge” is a term coined by the poet David Whyte about the courage to encounter new frontiers in our life—and our writing.

Deep authenticity lends to good storytelling, the stories we “shouldn’t tell” are the ones that dig into our soul. They keep tapping us on the shoulder and won’t leave us alone. Dorothy Allison, author of Bastard out of Carolina, tells people in her seminars to “Write from your stomach where you feel kicked in the gut. Write about what makes you feel sick and scared inside. That’s what’s real.”

That kind of invitation makes us want to run the other direction. We want to shut down. “But I can’t write about THAT.”

To push past those boundaries means exposing ourselves and our feelings on the page, first to ourselves. But most of us have aspects of our story that are scary and real, and the deep heart of a memoir is to pursue our truths. When tough truths are revealed, we change our relationship to our story and the past. We learn to see ourselves in new ways, and in doing this, transformation occurs, both in ourselves and in the story we are writing. Its powerful stuff.

Working with the Critic Voices

Where are your critic voices on a continuum from brutal to mild?

Write down what they say. You can even write the critic voices directly in the text. The critic can show up big when we write about an emotional or controversial subject.

Write an answer to each accusation the critic throws — learn how to fight back against it.

If it says, “You’re boring,” you can respond, “I’m not boring to my sister. She understands me.”

“You don’t know how to write.” You could say, “I’m learning craft in my writing class and I’m improving.”

The “outer critics,” might say, “How dare you write these secrets. You’ll destroy the family.”

Answer: “Right now, I’m writing this for me. I want to understand myself and my role in the family. I’m won’t show it to anyone, so no one will be hurt if I write my truths.”

The goal of these critics is to protect you, to keep you safe and small, but they silence you and bury you in shame. It’s important to make room for your true voice. Learn about your critics and fight back. Free yourself to write freely without shame.

More exercises on the Inner Critic and the topic of writing the dark and light stories in your memoir can be found in my books Journey of Memoir–The Three Stages of Memoir Writing and The Power of Memoir–How to Write Your Healing Story.