How to Write a Memoir without my Psychotherapist’s Voice 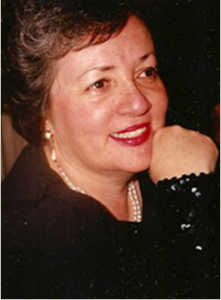 We want to welcome Linda Appleman Shapiro on her WOW–Women on Writing–blog tour to celebrate the publication of her book She’s Not Herself.  Being a therapist myself, I value the insights and the tips that Linda offers about using her own voice to write her memoir–not the distant and analytical voice of the therapist self. All of us need to find the voice that best suits the story we want to tell, the voice that invites the reader to share our world.  Welcome, Linda!

Had I wanted to write an academic paper on my experiences as a psychotherapist working with patients who suffered from depression or any one of the diagnoses that fall under the umbrella of neuroses, psychoses, and/or mental illness, in general, that actually would have been far easier for me to accomplish. It would have been a combination of academic research and vignettes for a Psychological Journal. However, I had no passion to write such a paper. There were and continue to be many gifted psychiatrists, psychologists, social workers and therapists of various schools of thought who write about their areas of expertise. I didn’t have a calling to do so.

In the ah-ha moment many years ago when I realized I had a story to tell, I was already in my late fifties. My life flashed in front of me in a way that words cannot explain, and I found myself in the middle of a summer’s night – with others in the house long since asleep – getting up and going directly down the hall to my office. Call it stream of consciousness or a compulsion, but once I began, the writing seemed to write itself. Having never written a book before, I had the outline for it all within weeks, perhaps even days. Yet, what I didn’t have were the tools to best help me show my story without telling it, without analyzing all the events and people I would be writing about. Analyzing came naturally. I had written critical papers throughout my years in college and graduate school, and had written process notes about my patients for years. No, I knew from the start that there were many ways to teach and I was not choosing an academic paper or a how-to manual.

To write a memoir, to share my family’s story, however, I had to learn how to create scenes and dialogue, describe where our family lived – our apartment, our neighborhood, our neighbors, and each of us. My mother, my father, my brother and me. My goal was to personalize it all, bring the reader inside with all of us as we lived, as we spoke or didn’t speak, and to witness my mother’s many break-downs and how each of us struggled to survive her mental illness. But I needed not to do so as a psychotherapist.

In short, it’s what I later learned every teacher of first time writers tells students: SHOW but DON’T TELL. And while showing was a real challenge, story-telling –once I really got into it – came more easily. I now think it’s probably a part of my DNA. My father – a brilliant young student had his studies end abruptly once WWI broke out in Russia. After the war and after immigrating to America, he was only able to complete high school, attending night classes while working during the day. Though he tried a handful of trades, he wound up spending the majority of his adult life as a salesman distributing paper and twine to what he proudly called “cleaning establishments.” Yet, even to succeed as a salesman, he needed to feel that he could fit into American society and learned that telling a good joke or sharing an anecdotal story took the customer’s mind away from what was his goal, which was to make the sale. With his habit of laughing as he told each joke, his laughter was contagious, his stories were amusing, and he succeeded in supporting our family by “making the sale.” Mother’s stories were always of a more personal nature and usually about the horrifying war years in Russia, arriving in America an orphan (along with her brothers and sisters), each one unwanted and un-nurtured by any of their distant relatives who separated them, housed them, and had them work to clean their homes and help with their own children until they were old enough to live as a boarder in a stranger’s house and join New York’s work force once in their teens,

As I write in SHE’S NOT HERSELF, “I wished that Mother’s stories were just that – tales, not a part of anyone’s real life, least of all hers. ‘What’s the use to look back?’ she would say. Yet, looking back was what she was compelled to do, especially when she was not herself. Her mind would transport her to where she was most determined not to go. In the telling, she was taken from us . . . . . . . Yet, I remained at her side, a silent witness, wondering where she was when her eyes lost their focus. All I experienced was her distance and transformation into an unpredictable, frightening creature, but one whom I could not let out of my sight.”

I listened to Mother’s stories and father’s jokes and anecdotes from as far back as I can remember and learned, if only by osmosis, the healing power of telling stories.
Also, since I don’t believe in coincidences, as I began to answer your question today, my husband just forwarded me a note from someone whom I’ve never met. She’s a professional trumpet player who became a fan of his years ago (as she listened to his many audio book narrations) and she said exactly what I’m trying to say, but better. She wrote: “I just finished reading Linda’s book last night. What a great story! It was so compelling, and what struck me about it, especially, was where it was coming from… her desire to help others by example, rather than instruction. It was, and is, a beautiful story about an amazing, and quietly heroic woman!” 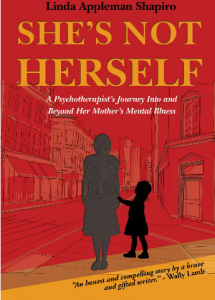 I certainly don’t consider myself to be heroic, but I do feel so grateful that she got my objective: “to help by example rather than instruction.” It is a gift to know that just one person experienced my story as I intended it to be experienced. I’d also like to believe that I am not only telling my family’s story but that of so many immigrants attempting to adjust to a new world, learning a new language, and struggling to be American in an America that often does not understand their plight or their pain. . . and to all the families that lived with unanswered questions about a family member’s illness and saw a sibling or a parent as I saw my mother when I wasn’t even of school age: “Her face would change beyond recognition and all that Father would say was, ‘Your Mother, she’s not herself these days.’ Perhaps he had no words to explain her illness to himself, let alone a child of five. Yet, if she wasn’t herself, who was she?”

As I poked at and peeled away the layers of my memory cells, I recalled images and incidents long since buried. Writing about them was not cathartic, as many think it must have been. It was extraordinarily painful. But, it taught me so much about myself, about how each of us learned to cope with whatever reality we had to face. In the end, I had far greater love for each of my parents as I fleshed out the details of their lives, and I also gained a deeper understanding of how children develop coping skills necessary for their survival. In sharing our family’s story, my hope is that readers who suffered and those who are still suffering – living in families where they are being robbed of the freedom to thrive due to whatever dysfunction they are living amidst – will find some degree of hope and believe in the possibility of moving forward as they witness my family’s survival. To suffer alone and without explanations is no way to live, and yet that is how we lived in the 1940s and 50s when the medical community offered no explanations to patients or their families, and everyone was a victim.

Scientific discoveries and treatments for mental illness have advanced in numerous ways since those years, but there are still families and religious communities that refuse to expose illnesses of any kind and live, instead, with shame, which helps no one, neither the patient nor themselves. If, by chance, my story lands in their hands, my hope is that they will find the courage to reach out for help, gain the knowledge and determination to find professionals who can guide them to work through the fears and vulnerable places that inevitably take hold as traumas always do.

As I did, I hope that they will then move toward taking secrets out of their closet, getting in touch with their demons as well as their strengths, and learn to move beyond the darkness of trauma and into the light of forgiveness without forgetting.