Any Road Will Take You There: A Journey of Fathers and Sons 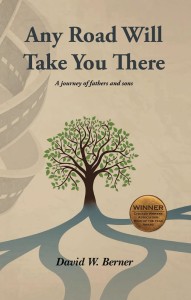 Here at NAMW, we are pleased to present a blog post for the WOW blog tour about David Berner’s book Any Road Will Take You There: A Journey of Fathers and Sons. This  is a heartwarming and heartbreaking story told with humor and grace, revealing the generational struggles and triumphs of being a dad, and the beautiful but imperfect ties that connect all of us. Recipient of a Book of the Year Award from the Chicago Writers Association, Any Road Will Take You There is honest, unflinching, and tender. In the tradition of the Great American Memoir, a middle-age father takes the reader on a five-thousand-mile road trip — the one he always wished he’d taken as a young man. Recently divorced and uncertain of the future, he rereads the iconic road story — Jack Kerouac’s On the Road — and along with his two sons and his best friend, heads for the highway to rekindle his spirit.

However, a family secret turns the cross-country journey into an unexpected examination of his role as a father, and compels him to look to the past and the fathers who came before him to find contentment and clarity, and celebrate the struggles and triumphs of being a dad.

There’s a particular response I give whenever I get a certain question at a reading or at a workshop about writing creative nonfiction or personal essays.

“So how did your family feel about what you wrote about them?”

My standard answer: “Depends on who you ask.”

It’s meant to be a joke, and I’m aware it’s not terribly funny, but it is absolutely true. If you write good things about people, they rarely have an issue. In fact, they generally love that you’ve written about them, and many times feel privileged to be in your story. But if you touch on a subject close to them that reveals something unpleasant, or turns the rock over on a sensitive matter, you must be prepared for the consequences. I’ll give you an example. My first memoir, Accidental Lessons, includes several scenes with my ex-wife. First, I must tell you, the two of us are good friends. It is far from the stereotypical friction laden relationship of former spouses. Despite this, my publisher insisted on signed releases from everyone mentioned in the book. When I presented the release to my former wife, this is what she said: I’ll agree with one condition. When it’s made into a movie, Susan Sarandon plays me. So, I got that going for me. And just for the record, no movie deal yet and nothing in writing from Susan.

In general, I believed everything I wrote about my ex-wife in Accidental Lessons was quite flattering. It wasn’t that I necessarily set out to write all great things about her, it’s just that what was needed for the narrative, her part of it, did not need to be about the times of our lives that were entangled in disagreement. So, when she read the manuscript, she had little problem with any of it. Was it true? Yes. I needed to reveal only what was needed. But what do you do when someone you write about is absolutely appalled by what you plan to publish or is outright angry about your words? Maybe their version of the same incident is much different in their eyes, and this creates serious tension, risking the relationship with that individual. How do you handle this?

I believe there are at least three things to consider.

First, you must be 100% true to the story. You must write what is real, authentic to you without compromise. There is no other way to create a meaningful personal story. I truly believe the reader will know when you are not being honest. Preserve integrity. Write from the heart, the gut.

Second, if it’s possible, let all those who are main subjects in the story read your manuscript. Prepare them for what you have written; let them know it may not be easy to read and that you are writing about difficult matters. Then, allow them to tell you exactly what they think, to point out errors, minor or major, and permit them to suggest changes. And if possible, ask them to write down their version of the scene or incident in question. Our truths are completely our own. They are no one else’s, and you must be true to your story. But permitting input from others can help you understand their truth, and some version of their story might actually be very good material to add to a redraft. It could, and many times will make your story better. This also applies to those who have died. Allow others who remember the deceased to offer their impressions and memories. This can inform your narrative in a positive way. However, in the end, it is always your story and you alone should decide whether or not to include their suggestions, thoughts, or versions. In the end, no matter what, the story you have written is yours. Keep it yours.

Third, be ready to take the heat. You are not going to please everyone. Some will remember differently; others will want to you remove certain aspects of the story, take out the dirty laundry, and there will be those who simply do not like your “tone.” It may lead to disagreements that will last for a very long time. You, and only you, can decide whether you can live with that possibility. Is your story worth it? Is your particular truth faithfully adding to the narrative? Remember, as a writer what you choose to reveal is as important as what you decide not to reveal.

In my most recent memoir, Any Road Will Take You There, I again had to have releases signed by as many people as I could, including my own two adult children, my good friend Brad, and again my ex-wife. For the most part, my former wife was satisfied with the manuscript. However, there was one scene where she believed I had not told the entire story. Not that I had lied, but that I had highlighted my involvement in a particular matter of parental disciplining and had almost entirely left her out of the story. She was right. But Any Road Will Take You There was about my relationship with my sons, about fatherhood, and in the scene in question what she had done or how she had responded did not necessarily further my story. She still believed I had taken far too much credit for how that parental moment played out and that I had given little credit to her. She had every right to question this. I would not deny her the chance to state her opinion. Still, I believed I had told the story truthfully. We just had a disagreement about the version I had chosen to tell.

What we are essentially writing about when we write memoir, creative nonfiction, or personal essays are memories. And they are our memories, the writer’s memories. But always remember, you are writing about other people’s memories, too. I recently attended a reading by author Chuck Klosterman speaking about one of his nonfiction works, a very personal story. He said he would never write another book like that again because one of the women he wrote about, although she believed he had portrayed her and their shared experiences quite truthfully, felt he had overshadowed her memories. Just the act of writing about what had happened between the two of them and then publishing it, trumped her personal recollections and essentially made her memories less important.

That’s a lot of power. So, be honest, but remember what you write about might be your story, but you don’t necessary own every piece of it.

Any Road Will Take You There: A Journey of Fathers and Sons  is available as an e-book and paperback at Amazon 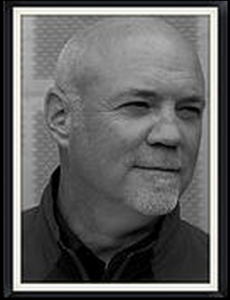 About the Author: David W. Berner-the award winning author of ACCIDENTAL LESSONS and ANY ROAD WILL TAKE YOU THERE-was born in Pittsburgh, Pennsylvania where he began his work as a broadcast journalist and writer. He moved to Chicago to work as a radio reporter and news anchor for CBS Radio and later pursue a career as a writer and educator. His book ACCIDENTAL LESSONS is about his year teaching in one of the Chicago area’s most troubled school districts. The book won the Golden Dragonfly Grand Prize for Literature and has been called a “beautiful, elegantly written book” by award-winning author Thomas E. Kennedy, and “a terrific memoir” by Rick Kogan (Chicago Tribune and WGN Radio). ANY ROAD WILL TAKE YOU THERE is the author’s story of a 5000-mile road trip with his sons and the revelations of fatherhood. The memoir has been called “heartwarming and heartbreaking” and “a five-star wonderful read.”