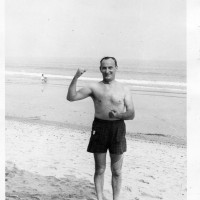 I can see my dad bent over his watchmaker’s bench, jeweler’s monocle in his right eye, squinting the left shut while he scrutinized a diamond. Dad didn’t have much hair from the time I could remember, but in this crouch there was always one wayward black-gray strand dangling in front of the monocle.

He proudly displayed his framed Gemologist certificate behind the diamond showcase in his small shop in Elizabeth, New Jersey. As a kid, I could never figure out why that piece of paper, earned after a short course in identifying the quality of diamonds and other gems, meant so much to him. It wasn’t until much later that I realized it was the only graduation certificate he ever received. Another reason he insisted I get a college education.

My dad and I operated like far-flung planets in the same solar system; my mom and my sister our shared moons, but never sharing the same orbit. I worshipped him as a child. At first because he could pick me up over the waves at Bradley Beach, protecting me from their washing machine swirl, the sand-caked bathing suit, gulps of ocean and salt-stung eyes, if I stayed close enough for him to grab me and lift me at just the right moment when the wave peaked its highest.

Staying close was not always easy. He would wade ahead of me in the surf until I got up the courage to run after him and cling to an arm or leg. Off the beach, he was home for only a couple of hours each night before bedtime, just one full day each week on Sunday. He never left his shop in someone else’s hands. “That was just asking for trouble,” he said.

Sunday was his bowling league, and I would beg to be taken along to watch or play pinball in the arcade area. I remember him being reluctant, giving me a fist full of quarters to keep me occupied while he competed with his team. He was pretty good too, and taught me how to hit a split for a spare.

He was always reading a couple of books at a time. Usually the newest popular fiction by his favorite authors: James Michener, Herman Wouk or Leon Uris. When he was propped up in bed, book leaning on his tummy and his black reading glasses balanced on his nose, I knew not to interrupt. Sometimes his bedside radio played softly.

Dad was the one who went out into the unknown world, encountering strangers daily, slaying the dragon of commerce with a very small sword. I was right to think him brave, even if I didn’t know why.

He was fifty when his shop went under, I suspect because of his generosity in extending credit and cutting prices when someone “needed” an engagement ring or a gift for Mother’s Day. Just 10 then, I remember he and Mom telling us the news, assuring us that everything would be fine. And, it was fine. Dad got a job with a jewelry chain and probably had the most productive years of his life. He won prizes for his incredible salesmanship, beating his own goals year after year. After his death, I found a letter from one of those bosses, folded into a tiny square of yellowed stationary and tucked into a strong box under his bed, praising his skill and expertise. It made me think of that Gemologist certificate, lost long ago.

I tried to stay close over the years, hoping he would always lift me over dangerous waves. It wasn’t until I wrote my memoir, Replacement Child, that I understood the illusive chasm between us. That the memory of my sister, killed in a plane crash when she was seven, was never far from his mind. What could be more of a reminder than a daughter who looked, and for all I know sounded, similar to his lost girl?

I learned a great deal about Dad from writing through his ordeal following that horrendous accident, pieced together from often-told stories, news articles and family notes. The hurt at being his “replaced” daughter faded and I came to understand just how brave a man he really was.

Judy L. Mandel is the author of the IPPY award-winning memoir, Replacement Child. She will be a workshop leader at the upcoming WRITE YOUR MEMOIR NOW! workshop retreat, sponsored by NAMW, October 3-5 in Connecticut. She will join NAMW President, and award-winning author, Linda Joy Myers and memoir teacher and author Jerry Waxler for the in-depth memoir retreat. Check now for early bird discount and special bonus!