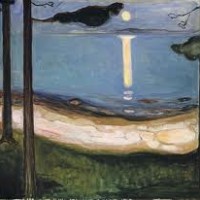 Many aspiring memoir writers feel that some of the most interesting aspects of life take place inside their own consciousness. But we always try to tell stories by showing the unfolding scenes. So how do you represent your inner world in a story?

One way, often overlooked, is to include visual or auditory experiences. Typically we associate hallucinations with drugs or psychotic episodes, but in fact, such experiences are far more common than you might realize, as I’ve come to see after decades of practicing meditation. When you’re staring into emptiness for long enough naturally you’ll see and hear things. And it turns out that such inner aspects of human experience show up regularly in memoirs, too.

For example, in Martha Beck’s “Expecting Adam,” about giving birth to a Down Syndrome baby, she had a vision of angelic visitors. In Tim Elhajj’s “Dope Fiend,” about his recovery from heroin addiction, he imagined, or perhaps hallucinated, an old drug buddy. In “American Shaolin,” about Matthew Polly’s study of martial arts in an ancient Chinese temple, the author saw things and began asking everyone he met if they have had such encounters. Many of the people he talked to acknowledged having visionary experiences.

During the heightened interest in Near Death Experiences in the 1980s, I asked a friend who worked in an intensive care unit if she had heard stories about people returning from clinical death. The next time I saw her she said she asked around the hospital, and almost every doctor she spoke to had heard at least one such story from a patient. One time I asked my mother if she missed my Dad. She said “I feel his presence around me all the time.”

Such experiences often leave powerful memories, and reporting them can share some of your most intimate moments. Of course, like any other scene in your memoir, it’s up to you to weave it in, and let the reader see how this experience helped you grow.