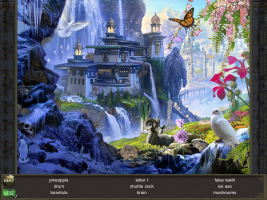 What do writing a memoir and playing hidden object games have in common? After spending more hours playing Everest: Hidden Expedition (Big Fish Games, Inc.) than I care to admit even to myself, I found that link. In this and similar adventure games, you must find hidden objects in order to advance to the next location and eventually make your way to the top of Everest. In this particular game, the objects serve no purpose other than testing your powers of observation.

There are far more hidden objects that the nine required to clear this screen. If you play again — and again — you’ll get a different array each time. It may not be obvious from this small picture, but the longer you look, the more hidden objects you’ll find and the easier it gets to find your way around the screen. I’ve noticed that I’ve begun mentally clustering the objects various ways like location or type.

Now for the memoir comparison. You write a memoir one scene at a time, just as in Everest. Each memoir scene is comprised of various “memory objects.” Unlike Everest, you won’t have a preplanned list to hunt for. You must peruse your memoryscape and select those items in it that best suit the purpose of the scene. As with Everest, the longer you observe a memoryscape, the more depth it gains and the more memories you’ll find. You’ll also begin to notice memories clustering and interrelating in unexpected ways.

In Everest you advance from one continent to another, but you have the freedom to move among a number of locations on each one in any order you please until you finish them all. In your memoir you may also jump around, with even more freedom, but finishing a memoir requires that you “solve” each scene.

In many ways writing a memoir is more like another type of adventure game where you discover tools and clues, for example finding the combination to a safe in an old diary hidden inside a locked chest. You had to find the key to the chest by looking inside a flower pot after finding the secret panel to access the room it’s in …. You just keep digging and poking until you find what you need.

You may find your memoir project is like that. Margaret Overton and Jonna Ivin both began writing to make sense of their lives, and their wild scribbling evolved into polished memoirs. Each found the writing process powerfully therapeutic.

One of the keys to the breakthroughs each made was to solve the puzzle of her mother’s life before she could solve the puzzle of her own. Ivin kept digging more deeply into her own memory to sift through clues to explain her mother’s alcoholism. The final clue was not in her memory bank. She only discovered it while talking with her aunt some time after her mother died. That clue completed her “Mother story” and flung open a door releasing her from the “Chamber of Fear” of following in her mother’s footsteps.

As I discovered, some objects in Everest are so cleverly hidden that I could look for a week without finding them. Some shred of sanity keeps me from that level of patience, so I sometimes opt for the Hint button. We have similar options in memoir writing. We can talk to friends and relatives who are familiar with the situation, always remembering that they may  not have perceived the situation in the same way to begin with, but their memories may hold clues to retrieve our own. Journaling and freewriting are time-tested memory joggers, along with photo albums and troves of memorabilia.

Yet another powerful way to lure hidden memories into view and make unseen connections visible are visual memory processing tools like timelines, clustering and similar tactics. I’ve been experimenting with this type of tool and have found several fun new approaches. I invite you to sample them and try their power for yourself by enrolling in my NAMW 3-week short-course, Soaring High, Digging Deep: Tools for Refining Your Memoir that begins this week. Click here for more details.