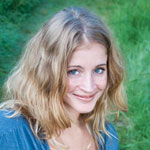 When I was 23, I wrote a novel about a Southern girl who leaves home and then returns after two decades away.The novel was completely fictitious and had nothing to do with my own story except the theme of leaving the South to make it in the world—at the time I was writing I was also fully engaged in my own experience far away from where I grew up. At the age of 29, I returned to that same story but wrote it from a completely different point of view—my own—to create the memoir called Just Don’t Call Me Ma’am.

The first novel was never published. It still sits in a box that is in the far back reaches of my closet. I don’t know who its neighbors are….perhaps shoes from my senior prom? Maybe some t-shirts from college I’m too nostalgic to part with for good? But the memoir I wrote is a book you can buy in a real, live bookstore….it sits with other books written by other authors and that still seems surreal to me. After  the wave of rejections came in for my first novel, I had doubts publication could be a part of my future.

But I had a story that I wanted to tell, and in both books the story is similar. For me, fiction was not the way to tell that story. I was so scared of putting too many details of my own life into a book that was fiction, of having the lines blurred and leaving people in my life guessing whether or not I was talking about my own experience that I went way too far in the other direction and created a book that felt like fiction. When I put that book away I had no idea that in six or seven years I would return to the same story in a completely different form. Obviously, the theme was something I thought about daily and so it never really left me. When it was time to write again, I returned to it—and this time I wasn’t scared to stick with the truth, so the stories came out in a series of personal essays that eventually were compiled into a memoir.

For me the point of writing (and reading) has always been to try and connect over the human experience—to know that there are other people out there who “get it” even when you feel like there’s absolutely no one else who has ever been in a jam quite like the one you’ve found yourself in. I started out believing that fiction was the only way to go, but now I see how powerful the truth can be.

It makes you—as the author—so much more vulnerable, but that space is where readers can really come in, stretch their legs, make themselves comfortable, and see what life is like in someone else’s skin. Knowing there are people out there who have benefitted from Just Don’t Call Me Ma’am in that way makes the unsold manuscript with its pile of rejection slips in my closet worth it.

Okay, almost worth it.

Anna Mitchael is the author of Just Don’t Call Me Ma’am, a memoir that details her twentysomething experience spent working as an advertising copywriter in Boston, Seattle, New York City and Denver. A reformed nomad, Anna has now returned home to Texas. She will tolerate y’all but reserves the right to raise heck when anyone calls her ma’am. You can more of her writing at annamitchael.com.