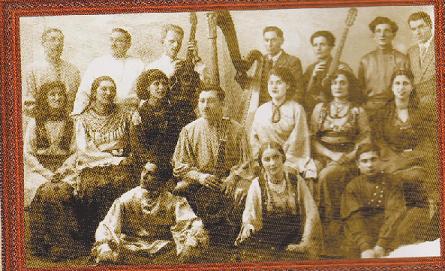 I came across this picture in a Romani pamphlet called The Notable Gypsies of Russia.  My grandparents are in the middle row center. Nearly every person I grew up with made their living on stage, and I have albums full of images just like this one to prove it. However, there was a period in my life when the glamour and glitz of the limelight mattered little to me. Growing up in the former Soviet Union, I was well aware of the shady reputation artists held in the eyes of many a good citizen. Theirs wasn’t considered a true craft, but something lazy people did to avoid hard work. In an attempt to hide my family’s profession from my classmates I’d make up new ones. My father was a butcher, my mom a school teacher. My grandparents, like proper grandparents, were retired and spoiled me with sweets during our visits.

But reality is what you see in that photo.

The reality is that I spent my girlhood watching vaudeville-like performances from the wings of ancient Soviet theaters, and inevitably, fell in love with the stage.

I still remember the way my mother’s stage skirt frothed around her ankles when she danced. The smell of velour house curtains always draws me to sit in the front rows of theaters. A simple Gypsy tune can push me to bawling inside seconds.

When I set off to write American Gypsy, my childhood suddenly came alive. Uncanny, I thought. How was it possible to remember the smells, the sounds, the way things felt to the touch as if I had experienced them yesterday? And yet, the more I delved the stronger my senses worked, until complete scenes materialized themselves, transplanting me back in time. It took writing a memoir about those bygone days for me to embrace the significance of early memories. To recognize the ways a touring life has shaped what I am today, the role it played in my character. The entire process felt like I had jumped into a time machine set for twenty-some years back. Once there, I relived my childhood, paying attention to things I had missed the first time around. It gave me a chance to appreciate, make peace, and learn.

In memoirs, the propinquity of our childhood experiences is fascinating. Often times, these passages resonate on a highly emotional level. And how could they not when most enduring impressions are made on the young? Most vital connections are developed as we learn about ourselves and the world. The thing about childhood that draws us together is that it is an uncharted territory we all once roamed no matter what we have grown up to become. A literary journey into this period in our lives can be liberating, and I believe that readers feel this transformation as intensely as writers.

Oksana Marafioti is the author of AMERICAN GYPSY, a memoir of a Romani (Gypsy) childhood.  The title is being published by Macmillan’s Farrar, Straus and Giroux, and is due out in 2012.  Meet Oksana at our next Memoir Writing Roundtable on Thursday August 4, 2011.  Have a question for her?  Post it on this page in the comments section and she’ll address it at the Roundtable.