Land That I Love: Three Reasons to Sink Your Memoir Roots Down Deep into Place 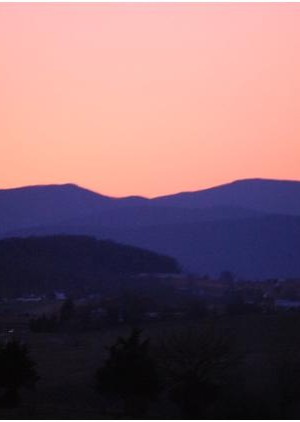 Sunset over the Shenandoah Valley, Virginia, taken from our back yard. I recently moved back to this place where my husband and I met 45 years ago and where he grew up. This place holds special meaning for both of us.

Editors Note:  Join Shirley this Thursday at our Memoir Writing Roundtable Tele-conversation:  Land That I Love:  Writing About Place

Do you love the landscape in which your memoir takes place? If this question catches you off guard, consider three reasons to make the setting of your story like a character in its own right.

Place serves many functions in memoir.  I will focus here on three of them.

Most of us who decide to write about our lives worry about coming off as either an egotistical hero or a whiner. Navigating around the Scylla and Charybdis of authorial tone takes a lot of work. Part of the secret to striking the right balance is focusing on something that formed you but is not you. Beautiful lyric writing about time and place relieve the pressure that builds after focusing too relentlessly on the image in the memory mirror.

Tracy Seeley, author of the memoir Ruby Red Slippers recently published an essay on place in The Writer’s Digest.

Her essay brilliantly dissects a half dozen other memoirs, illustrating the value of expanding the field of vision to include landscape and its history in memoir.

You may, like Kathleen Norris, Annie Dillard, and Carlos Eire, write with constant consciousness of the spiritual. On the contrary, perhaps the idea of the sacred makes you squirm. Even if your memoir is about atheism, however, you’ll want your reader to sense your connection to something larger than yourself. That’s the beauty of beauty as revealed in landscape. It doesn’t matter what name you call it– spirit, energy, awe, beauty, wonder, or God—the power of place is that it connects you to life in both its physical and metaphysical forms.

Willa Cather first opened my eyes and heart to the power of place when I read her books, especially O Pioneers!, The Song of the Lark, and Death Comes for the Archbishop. She wrote passionately and poetically about the prairie and the desert southwest. Here’s a description of Alexandra, the larger-than-life woman pioneer: “For the first time, perhaps, since that land emerged from the waters of geologic ages, a human face was set toward it with love and yearning.” (1913)

Scott Fitzgerald loved Willa Cather’s work, and his own best lines owe a lot to hers. Here, for example, one hears echoes of the above passage in his conclusion to The Great Gatsby (1925):

Most of the big shore places were closed now and there were hardly any lights except the shadowy, moving glow of a ferryboat across the Sound. And as the moon rose higher the inessential houses began to melt away until gradually I became aware of the old island here that flowered once for Dutch sailors’ eyes–a fresh, green breast of the new world. Its vanished trees, the trees that had made way for Gatsby’s house, had once pandered in whispers to the last and greatest of all human dreams; for a transitory enchanted moment man must have held his breath in the presence of this continent, compelled into an aesthetic contemplation he neither understood nor desired, face to face for the last time in history with something commensurate to his capacity for wonder.

The capacity for wonder permeates writing about place in any genre, but in memoir it ties the deeply personal to the universal in ways unreachable by other means.

If you want to meet a philosopher of place, I recommend that you read John O’Donohue. You can meet him at this website and listen to him read one of his poems of place as you see pictures of the western coast of Ireland, the landscape that made him the poet of spirituality and place. It’s an incredibly beautiful blessing.

Every place has its champions, and many places now include communities of writers who join together to celebrate and sustain the landscape, history, and ecology of a place. For example, Women Writing the West is an organization of writers who write about the American West. Fiction, non-fiction, poetry, memoir. Men are invited to join. They have a website, a conference and a competition (The WILLA Awards) for published books with a female subject who lives in the American West. If your memoir touches on this region, you might want to check them out. They can put you in touch with publishers looking for western material.

No matter where you start your story, you can reach more readers and touch them more deeply if you immerse yourself in the memory of the places that formed you.

Tell us your “place story” in the comments below!

Shirley Hershey Showalter is  a farmer’s daughter turned college professor, then college president, later foundation executive.   She has published articles in USA Today, The Washington Post, The Chronicle of  Higher Education, Christian Century and many others.  Writing a memoir about growing up Mennonite in  America, 1948-1966.  Seeking others who read, write, and teach nonfiction/memoir.  Goal:  read and review 100 memoirs!  Follow Shirley on her blog at http://www.100memoirs.com