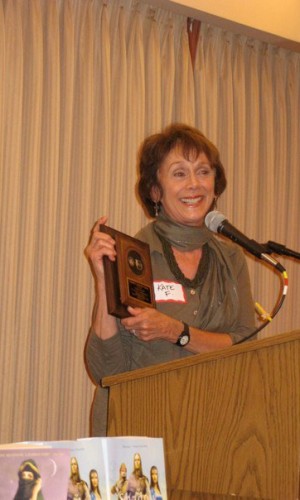 An Interview with Kate, author, librarian, university lecturer, and storyteller.

NAMW:  Tell us about your current work.

Kate: Currently I am working as editor on a groundbreaking memoir anthology featuring stories from women about their mothers or mother figures. Its working title is Wisdom Has a Voice: Every Daughter’s Memories of Mother to be released in Fall 2011.

I have always loved stories, especially fairy and folk tales from the oral tradition, the deep stories that have lasted millennia. Reading these tales as a child offered a safe, magical place and provided a framework for my emotions and challenges. Later, I came to understand how compelling stories could be a “locus,” an internal place of reflection and strength. Not surprisingly I became a teacher, then a storyteller, and sought to teach traditional storytelling throughout the California public school system with a grant.

At the conclusion of that educational project, I realized that the cultural context for many traditional tales no longer existed and new storytelling traditions for cultural transmission needed to flourish. Working on annual anthologies for Redwood Writers (CWC branch) over the last five years, I soon discovered that personal narratives often contained the same truths as the old folk tales. What a breakthrough that was for my understanding of “new age” storytelling! At the same time I saw the power of women’s memoirs about mothers and grandmothers, our generational legacy, yet how hidden women’s stories were.

So began the Wisdom Has a Voice project! In this, I am fortunate to be joined by Lynn Henriksen, President, WNBA-SF, as co-editor of the upcoming anthology.

NAMW: If you could imagine the title of your story—what would it be?

NAMW:  What helps you to get your writing done?

Kate: At present I am editing more than writing. But when I do write, it is all at once! That is why I enjoy writing short memoirs: memories play in my mind, shift and change, come to a boil and then spill over on the page. Once written, the editing process begins and that again takes time to stop and start, think and write. Writing from one’s life content is a much more internal process, less regimented than an objective piece, at least for me.

NAMW:  What are your five favorite books?

Kate: I have many favorite books, but these are some of the most influential in finding my own voice:

Women Who Run with the Wolves by Clarissa Pinkola Estes

Spirit of a Woman: Stories to Empower and Inspire edited by Terry Laszlo-Gopadze

NAMW:  Talk about who the audience is for your current work.

Kate: The audience for Wisdom Has a Voice is primarily middle-aged women, ages 40-60. However, I do hope to reach women of all ages, young adult to the elderly.

NAMW:  What is the most significant turning point in your life?

The most significant turning point in my life was becoming a mother at age 40.

Up to that time, I thought of myself as a dilettante, but when I became a mother and soon a single mother I began to take myself seriously as a real adult with deep commitments and responsibilities.

Kate Farrell, founder of the Wisdom project, is a graduate of the School of Library and Information Studies, UC Berkeley. She has been a language arts classroom teacher (pre-school and grades kindergarten through 12th), author, librarian, university lecturer, and storyteller in Northern California since 1966. She founded the Word Weaving Project, funded by grants from Zellerbach Family Fund, San Francisco, 1979-1991, based on her experience with storytelling and her belief in it, to encourage educators at all levels to learn and enjoy the art.

Her newest publication, Girl in the Mirror, is a young adult novel, Unlimited Publishing, 2009. Currently she is a part-time school librarian in San Francisco and lives in Santa Rosa, California. She is the mother of a son who lives in the City.