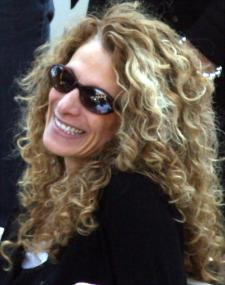 An Interview with NAMW Member of the Month, Debra Sanders

Linda:  Tell us what you want to write about, or what you are working on.
Debra: There are several projects I’m working on and that I would like to tackle, but none so much as writing the story of Kristy—a student I had when she was thirteen whose parents took her out of school and kept locked up so that we had no access to one another. When she was 18 she escaped and spent the next 11 years searching for me, but there are a LOT of Debra Sanders in this world and she never found me.  Then, I set up the Panache website and within a week I received an email from her. I had not heard a word from or about this girl for seventeen years, though I had never, ever forgotten her and it was just stunning to open up my box and see her name. Anyway, that launched an 11 month journey where she finally could tell me her story. It unfolded through hundreds and hundreds of pages of daily instant message conversations and emails.
One day I hope I will be ready to write this story because it needs to be told. It’s an achingly painful story of abuse for sure, but ultimately, it’s the story of such courage and really, in many ways it’s a love story. Kristy gave me this remarkable gift of trusting me enough to reveal eleven different personalities, each of whom was in search of the mother-love (they) had been so denied. I think it’s rare in one’s life to experience such an intimate sharing of all the parts of one person; and both in the name of justice and to honor Kristy; I would like to get to a point of being able to write her story.

Linda: If you could imagine the title of your story—what would it be?

Debra: You mean, like the title of my life story? I think it’s already been taken—It’s a Mad, Mad, Mad, Mad World!  Next to that title, maybe Shades of Gray because so much of my life has been about coming to terms with the fact that nothing really exists in black or white—not love, not family, not friendships, not work…not even the things we are passionate about.  I think in some ways it’s easier to move through life if we exist thinking in black and white—things either are something or they’re not; either someone loves us or they don’t; someone or something is either good and honest and ethical or they’re not. But in fact, little in life actually unfolds so clearly.  At least in my life it hasn’t.  It seems to me that my life has been (and is) all about a series of hilarious, funny, spiritual, painful and loving experiences that teach me how to come to terms with (and even embrace) the shades of gray.

Linda: What helps you to get your writing done—for instance—a writing schedule, taking a class, reading.

Debra: Taking classes definitely helps me a lot. I have taken several of the Gotham Writers Workshop classes and they have been enormously helpful. And then, every time I listen to one of Linda Joy’s teleseminars or to one of the other presenters who offers a seminar, that always motivates me to write because inevitably I learn something new. More than anything though, I think reading is what motivates my writing. When I read something very powerful—whether fiction or nonfiction—it makes me want to write.  It makes me want to just sit down and practice and work at it; to keep trying to learn how to write so well that I can wrap my arms around a reader with words and transport them out of their world and into the world I am trying to portray.

Linda: What are your five favorite books—okay, you can make it a little longer if you need to.

Debra: Oh my gosh, that is SO hard for me to answer because when I read a really well written book, I am so “there,” so entirely present wherever that author has taken me that it suddenly becomes my favorite book. I do better with lists like, Books I Wish I Had Written (The Liar’s Club by Mary Carr, among others) or Books That Made Me Cry the Hardest (I have to say that “Don’t Call me Mother” might just win top prize on that one—I was a basket case when I finished it); or Books That Haunt Me For Years. I guess in this last category I would have to list three books: Imagining Argentina by Lawrence Thornton, Life and Death in Shanghi by Nien Cheng and The Bone People by Keri Hulme. I read each one years and years ago and each still evokes emotion in me when I think about them now. Even though I have long forgotten the details within them.

Linda: Is there anyone who did not want you to write your memoir? Why not?

Debra: I suspect there were several who did not want me to write my memoir, A Matter of Panache because there are parts in it that disclose pretty explosive information about some of the unethical and/or illegal practices that go on in our public schools. I had to pay an attorney $400.00 an hour to read the book and make sure that I was not at risk for being sued because I refused to change any names or disguise any identities except those of the children. And I have to say, it was worth every penny to have that done, if for no other reason than my piece of mind. Because I had to tell the truth in this story, even knowing it might land me in a courtroom.

Wow. I could talk a long time about deciding to write a memoir that discloses things about people who are still living.  There is a serious bit of digging and squaring off with yourself that has to be done before coming to that decision and I know that this is an area of memoir writing that pretty much every person who writes one has to struggle with at some level.

Linda:  Talk about who the audience is for your memoir.

Debra: I know you’re not supposed to say this, but in some ways it’s for anyone who has had to dig deep and come to terms with change or failure or painful loss—and that’s pretty much everybody, I think.  The people I have gotten the most responses from through my website email are people either with a head injury or who are closely connected to someone with a head injury and people connected to children with special needs—either parents or teachers.  But I’ve also received letters from people who read Panache who have no connection to either of those things but who were moved by the story.

Linda: What is the most significant turning point in your life?

Debra: I think maybe I’m still in the middle of it! I purposefully ended Panache on an uplifting note for many reasons, but I have to say that even now, almost seven years after my accident, I am still learning to live with the effects of this head injury—still learning to let go of the person I was and enjoy myself as the person I am. It’s not the accident that will be the most significant turning point in my life; it will be when I realize I have turned the corner looking straight ahead and have stopped glancing backward that I will feel like something truly significant has taken place. 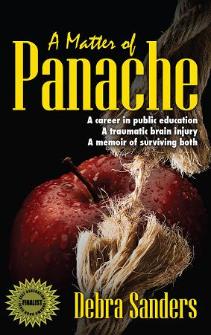 Debra Sanders is a happy, unconventional gardener in her mid-fifties who spent most of her adult life in Alaska but who now lives with her two dogs in Colorado Springs. Nothing makes her happier than when somebody buys, A Matter of Panache and is so moved as to write her a personal letter telling her their story.